A few days ago Dave posted on his blog an entry and picture of a Porsche getting pulled over by the Indian police on "the one piece of road [in Mumbai] that is actually built for going fast." He even taunted the Porsche driver with the Eastern-themed "Instant karma, baby!!" Honestly, though, I thought he could've come up with something more clever, perhaps, "How's that karma suit ya?" (Yes, yes, I know the contraction is colloquial.)

Dave's post reminded me of the time this spring when Sam decided to play chicken with a Porsche, and all I could think to do was grab my camera. 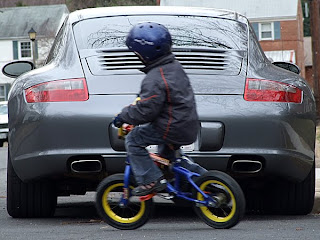 (No Porches or kids were harmed in the making of this picture.)

This got me thinking about cars and our family history. There have been some posts with cars as background objects, but no posts featuring cars. Let's change that!

I'll start with pictures of Grandpa's first car, which Ellen identified as "the Mayflower" in a scrapbook she put together about Grandpa's family.* (Thanks, Ellen!). 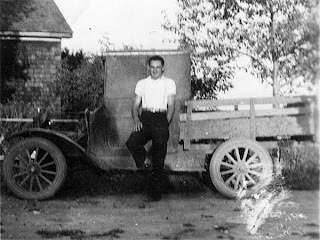 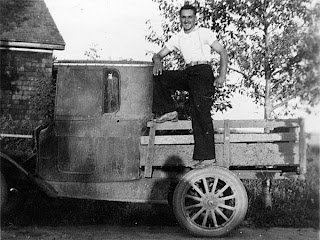 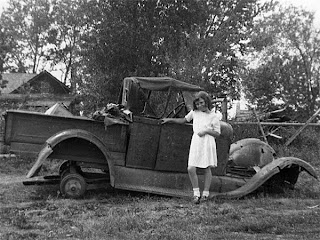 Regarding the third picture, Ellen wrote, "About 10 years later Jolayne stands by what is left of the Mayflower - 1949 -". It would be great to know some stories about this car and, ultimately, its demise. Where did Grandpa get it? How did it run? What did he use it for? What happened to it?

I also have a scan of the receipt for the first car Grandma and Grandpa bought. 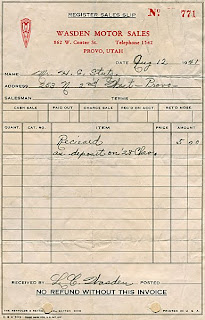 Imagine, a $5 deposit on a car! You would be hard pressed to get two gallons of gas for $5 now days. I am not sure whether or not I have a picture of this '28 Chev, but would love to see one.

*A PDF file of this album exists and is under 10mb, so it can be e-mailed easily. If you don't have it yet, just ask and ye shall receive.

Andrew Bore writes in the comments that the picture of the girl in front of the Mayflower "is a picture of my mom (Jolayne) that I've never seen before. Thanks!" For those who may not know Andrew, he is the grandson of Fern (Grandpa's sister), who was Jolayne's mother. Thanks, Andrew!

It's good to see the extended family providing their insights to these pictures, as I hoped they would in an early post (end of second paragraph).
Posted by Rob Stutz at 10:30 PM

Questions or suggestions can be submitted to stutz at montana dot com.